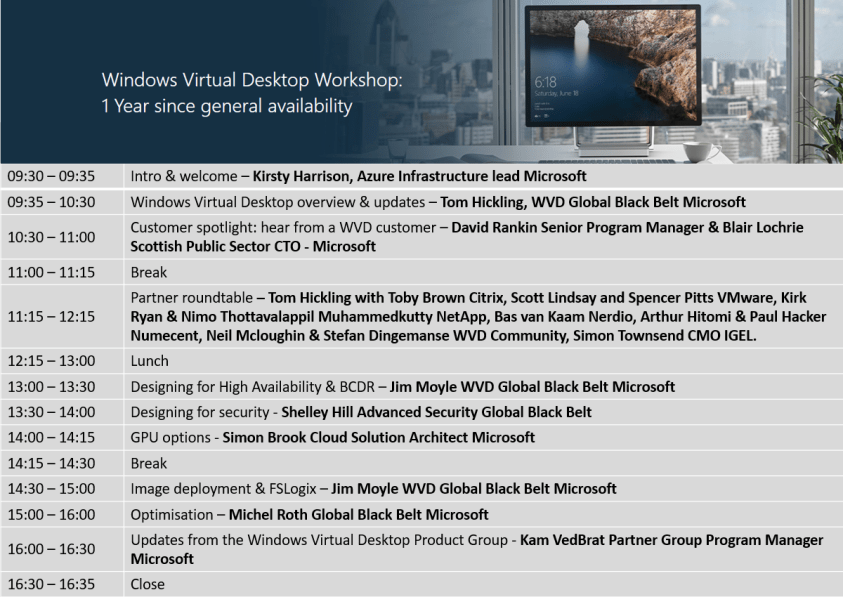 First we will give you a community stats update:

At this virtual event, you’ll hear from Microsoft experts and some key partners about how Windows Virtual Desktop has the ability to transform the way your organisation delivers IT to its end users.

Neil McLoughlin and Stefan Dingemanse will also join during the Partner roundtable to discus what they are seeing within the WVD Community and to talk about the future of WVD.

You can sign up for this event via –
Windows Virtual Desktop Workshop:1 Year since general availability | Microsoft

The Belgium WVD User Group have released the recording of their November meeting. In this meeting they had Micha Wets giving an introduction to deploying WVD with Azure DevOps, and Jen Sheerin giving a session about WVD and Terraform. You can view the recording here:

The German WVD User Group have released the recording of their sessions from the November meetup. In this meetup Mike Walsh from NetApp (former Cloud Jumper) has presented the Virtual Desktop Service (English session) and Sebastian Meyer has presented the very famous Beiersdorf Usecase with Sepago and Microsoft.

The sessions as well as Patricks News of the Month slides are available here:

Christian Brinkhoff has shared a few WVD related positions that are open at Microsoft. There are 3 positions open, a Principal PM, and 2 x Senior PM’s. You can view the positions here:

Microsoft have released RDP Shortpath into public preview. RDP Shortpath basically optimised your connection to your WVD Desktop by using the UDP Protocol and a secure connection between the client and the desktop. Initially testing done by ourselves looks extremely promising with a huge drop in latency and increased bandwith. You can view more information here – Announcing public preview of RDP Shortpath transport for Windows Virtual Desktop – Microsoft Tech Community

Microsoft have released updated guidance of RDP Bandwidth requirements. With the Public Preview of RDP Shortpath this will become even more important, as some customers the WVD traffic may potentially now be traversing your Azure networks, instead of going over the internet. You can view the updated guidance here – Remote Desktop Protocol bandwidth requirements Windows Virtual Desktop – Azure | Microsoft Docs

The latest version of FSLogix Apps is now GA and production ready. It includes fixes for e.g. OneDrive, Search, RW disk cleanup and much more.

Mr T-Bone has shared his steps on how to install and configure Teams in a WVD Environment. In the blog post he explains the steps involved, as well as the policy settings which need to be configured to get it working. You can view the post here – Microsoft Teams on Windows Virtual desktop – Mr T-Bone´s Blog

A new release of the WVD PowerShell module

Mr T-Bonse has also reported that a new version of the WVD PowerShell module was released which is v2.0.1. It seems that the new features are for MSIX Support. You can read more here – A new release of the WVD Powershell module – Mr T-Bone´s Blog

The Azure Academy have released their latest YouTube video and in this one they take a look at the recently released into public preview, RDP Shortpath. In the video they explore how to set it up, how to test it and much more. You can watch the video here:

Desktops in the Cloud Episode 8: Experience the latest WVD in the Azure Portal updates

The team over at Desktops in the Cloud have released their latest episode, this time with Pavithra Thiruvengadam from the Microsoft Engineering team. In this episode Pavithra discusses the latest updates in the Azure portal for WVD. You can watch the video here

Marcel Meurer has released a blogpost in which he describes how to use his WVDAdmin tool to enable RDP Shortpath for multiple hosts. This feature has many many use cases but this is a great example of just one which could save you a tonne of time! You can view his post here – WVD Admin – Custom Scripts to run administrative tasks | ITProCloud Blog

Ryan Mangan has written about a post about Parallels RAS going into public preview. This is particular interesting as he has reported that it now fully integrates with WVD & FSLogix Profile Containers. This looks really really interesting so looking forward to seeing how this develops in the future! You can read more about it on Ryan’s site here – Parallels RAS 18 Public Preview – Ryan Mangan’s IT Blog

Microsoft have released Azure Files SMB Multichannel into Public Preview. If you are using FSLogix to manage your profiles then this is going to be hugely beneficial to your environment with some very healthy performance increases. It’s only available in selected regions but will hopefully be coming to all region soon! You can view more information here – Boost your client performance with Azure Files SMB Multichannel | Azure Blog and Updates | Microsoft Azure

Timothy Mangan, Bogdan Mitrache and Kevin Kaminski have published a free e-book about MSIX Packaging. In this e-book they give you an overview of the industry and an introduction to how MSIX is more than just a modern packaging experience.