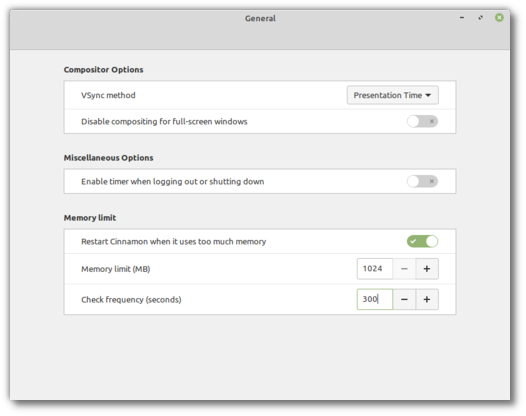 Thank you for your donations and for your support.

An announcement was made last week to explain why security updates are important and to remind people to update their computer.

If you haven’t read it yet please visit https://blog.linuxmint.com/?p=4030.

We started working on improvements for the Update Manager. In the next release the manager won’t just look for available updates, it will also keep track of particular metrics and be able to detect cases where updates are overlooked. Some of these metrics are when was the last time updates were applied, when was the last time packages were upgraded on the system, for how many days has a particular update been shown…

In some cases the Update Manager will be able to remind you to apply updates. In a few of them it might even insist. We don’t want it to be dumb and get in your way though. It’s here to help. If you are handling things your way, it will detect smart patterns and usages. It will also be configurable and let you change the way it’s set up.

We have key principles at Linux Mint. One of them is that this is your computer, not ours. We also have many use cases in mind and don’t want to make Linux Mint harder to use for any of them.

We’re still forming strategies and deciding when and how the manager should make itself more visible so it’s too soon to speak about these aspects and get into the details which probably interest you the most here. So far we worked on making the manager smarter and giving it more information and more metrics to look at.

Package updates were published yesterday for the following projects: xapp, warpinator, nemo, cinnamon-menus, nemo-dropbox, nemo-media-columns, nemo-python. They represent a significant number of changes and fix a variety of issues.

On fast computers an xapp component could delay the login time by up to a second. This was in place to guarantee systray compatibility for indicators and QT applications and it held the session to make sure the system tray was in place before any auto-started applications. This feature was redesigned and the delay no longer exists.

Many usability and niche issues related to favorites were fixed.

An issue was found in the way Nemo handled style calculations. Resizing file browser windows could lead to an accumulation of recalculations and eventually create latency on focus after a while. This was fixed.

Memory leaks were also found and patched in Nemo and some of its extensions.

On the desktop itself, usability bugs affecting bold fonts and icon sort order were fixed.

When the upgrade path from Linux Mint 20 to Linux Mint 20.1 was opened we received feedback and bug reports related to a plymouth issue on computers with LUKS-encrypted drives.

We couldn’t identify the cause of the problem. Because the issue only affected some users we first thought it was hardware-related and that it had something to do with NVIDIA drivers.

Before I explain what happened and its consequences, if you’ve been waiting for that fix I’d like to apologize for the time it took and thank you for your patience. As of today this bug is fixed. We identified its cause on Friday and we sent a Plymouth package update to our repositories today which fixes the issue.

The story doesn’t end here though. This bug made us aware of a very important issue which affects Ubuntu (and Debian also, but to a much smaller extent), the issue of non-reproducible builds.

This is quite technical. When we moved from Linux Mint 19.3 to Linux Mint 20, we moved from an Ubuntu 18.04 to an Ubuntu 20.04 package base. One important difference between these two package bases is the fact that Ubuntu 20.04 is a merged system (i.e. a system where some paths such as /bin and /usr/bin are merged via symlinks and are effectively the same, this is described here: https://wiki.debian.org/UsrMerge).

On a merged system if a package places a binary in /bin and another package calls it with the wrong path (/usr/bin for instance), it doesn’t matter, it works anyway. This is an improvement for users but it also hides potential issues from a maintainer’s point of view. If you package something with the wrong path, your package continues to work on merged systems but not on non-merged ones.

Starting with version 20.1, Linux Mint also adopted usrmerge and all fresh installations are merged. As part of the upgrade from Linux Mint 20 we recommended people merged their system but not everybody did. We were aware of these potential issues at the time and explained it in the upgrade instructions. This was done the very same way by Debian and by Ubuntu when they merged as well. All distributions are committed to supporting both systems.

Debian went further though and understood the impact this could have on build processes. If a package scans its build environment to assess the path of a particular binary and injects that path in the resulting packages, then issues can happen if the build environment is different than the user’s.

Take plymouth for instance, when you compile it from source it scans the build environment to find the path for a systemd binary called systemd-tty-ask-password-agent. On Debian systems, the systemd package provides this binary and places it in /bin. The plymouth build uses autotools and a routine called AC_PATH_PROG to find the path for systemd-tty-ask-password-agent and then injects that path in the systemd service it provides to call it.

On a non-merged computer systemd-tty-ask-password-agent is in /bin (where the systemd package puts it). On a merged computer, it’s both in /bin and in /usr/bin (since these two directories are the same there).

Debian understood the importance of getting the same output from builds in different environments. In other words, whether the build environment is merged or not, not only should the resulting packages work on all systems, but they also should be identical in every way. Debian runs continuous integration checks to ensure all its builds are reproducible and patches packages where this isn’t the case.

The plymouth source code was indeed patched in Debian to prevent this issue but not in Ubuntu. Worse though, and this is really important in our case, since 20.04 (and thus for us since Mint 20, not 20.1), Ubuntu docker images and user systems are merged, but the Launchpad build environment is not. In other words, some source packages available in 20.04 produce packages which are different than what is in the repositories when they are rebuilt. Because the Ubuntu build infrastructure for 20.04 hasn’t been merged yet we don’t need to worry about binary packages built by Ubuntu (whether the source package builds are non-reproducible or not, if they’re built on non-merged environments they’ll work everywhere).

Because we’re primarily using docker to build our packages and because our images (since 20.04) are merged, we need to worry about this as much as Debian did and not only fix this particular issue but make sure we detect any non-reproducible builds going forward and patch anything that introduce variability and hasn’t been patched upstream already. We’ll be developing internal tools ASAP to tackle this. We’ll also review our own cross-distributions projects (Cinnamon, xapp to name a few) and make sure they’re not scanning paths that way or introduce these kind of issues in their build.

Although the solution to a memory leak is an actual fix some leaks go undetected for years. Most of the time it’s because they’re hardware or driver-specific, sometimes it’s simply because the bug report doesn’t point out at something specific we’re missing and we’re unable to reproduce the issue.

Cinnamon itself relies a lot of your GPU drivers. It can use anywhere between 80MB to 1GB RAM depending on your system and what you ask it to do. It’s particularly small on Intel and open-source drivers and particularly big on 64-bit proprietary NVIDIA ones. It also starts small and uses more memory as you activate more of its features. It typically grows over time and up to a certain point. That point depends on how many applets you’re using, whether you’re using all of its features and the system you’re on. Passed that point, if Cinnamon continues to grow indefinitely, you’re looking at a memory leak.

We know there still are a few leaks out there because we hear of people who come back to their computer after days of it being idle to find their Cinnamon process using 2GB, 4GB, 6GB of RAM. We don’t know what cause these leaks yet but we’ll have a workaround in Cinnamon 5.0.

Using the system settings you’ll be able to set a maximum amount of RAM Cinnamon can use.

If that maximum amount is reached Cinnamon will restart itself. You won’t lose your session or your windows, it will just be unresponsive for about a second while it restarts itself internally. It will keep a log of such events so that you can see if this happens often and help us troubleshoot the issue.

Another thing we’re improving is spice management. In past Cinnamon versions there were differences between the installed tab and the download tab for applets, desklets and extensions.

We modified the way things work to ensure everything is properly translated and that all spices have the same name, icon and description whether they’re installed or not.

We’re also showing more information such as the author’s name and the unique ID of the spice and we’re currently working on the ability to graphically install 3rd party ZIP spices.

Behind the curtain we also strengthened the validation and the translation of spices and implemented continuous integration.

A total of $18,779 were raised thanks to the generous contributions of 782 donors: